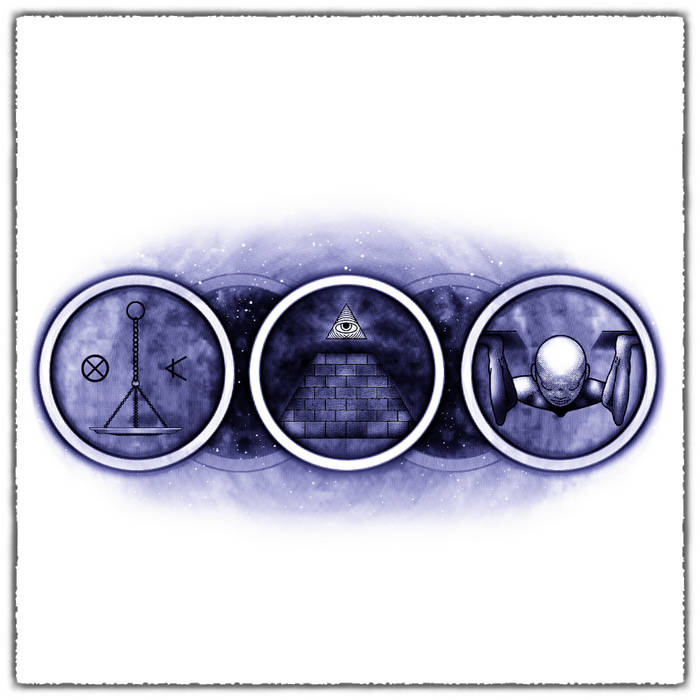 Dedicate to Hekate Law, my third and final apprentice.

When dedicating a song, I aim to make it something the person would enjoy... although I also aim to mess with them at the same time. The exception to this was "E Seri Mushuto (Chincho)", as he wasn't alive to hear it. Instead, I composed the song in Mushuto's very own style. Imitation is the finest form of flattery. The main album cut of "LAW" is specifically minimal and clean (almost pop), ending as one of the most orderly tracks on the album. Even the bassdrop that transforms into a moan is a nod of the head to Hekate's motto: "Self-improvement is masturbation and I'm rubbin' one out."

Hearing Phutureprimitive's "Symbiotic Remix" of Bluetech's "Oleander" was the defining moment where my interest in psytrance was rekindled for good. Hidden under the snare and tempo, you can still hear the inspiration that remix has had on this track.

While the story works with the meta-laws of a virtual world and how they're affected by the laws of physics, the art centers on the type of law much closer to our current time and place. People organize themselves and are organized by government, and government is comprised of law (you can call it "language" if you like). For law to exist, it requires three elements: The Token, The Medium and Power.

In this case, the token shown is the scale--Justice. In the past, the Token has been God, land, fertility and more. The Token is what people believe in... or at least what the majority has agreed on. It's both system and symbol. If the people didn't believe, it would be thrown into revolt and a new token would take its place. Every human has their own personal token that justifies their actions... it excuses their crimes and other slights. "You don't know what I've been thru", "Do you know who my family is?", "I worked hard for this", "I'm from the street, you don't know me", and so on. The government, as the body of the people, has a primary token just like any other person. We don't go to war to rape, murder and steal land for ourselves. We go to war for "democracy", for "peace", for "safety" and for "freedom". But you take away the token, and you see it (or the person) for what it really is.

The Medium shown is the all-seeing eye atop the pyramid. You can find this symbol on the back of a dollar. Law isn't law unless it can be communicated. The Roman Empire may have declared that all citizens of the world must follow Roman Law, but the tribes in the Americas didn't get this fax and so didn't even consider the notion. As communication expands via technology, so, too, has the size of governments grown. But communication is merely the expression of law. The medium goes both ways, and law cannot call upon power unless it is able to observe. As far as the all-seeing eye sees, or as far as technology allows, that is as far as the government can maintain itself. Often, the ability to observe (impression) exceeds the ability to communicate (expression) or enforce (power). People once gathered around the campfire, then at town halls, then churches... now they gather around the television.

Power is represented here by Atlas holding up the flat earth. He represents both strength and the burden required for such strength. I admit that I made it a flat earth so that he could form the W in LAW much more visibly. Even if law has The Token and The Medium, it still cannot sustain itself without Power. If a person acts outside the system, then the system must use force to restore order and maintain the integrity of the system. Where the law cannot be enforced, you will find different governments spring up (e.g., the self-regulation in the hood, the cartels of the jungle, etc.). The larger a government, however, the greater the burden to sustain enough power to maintain itself. Just as a body that grows too muscular begins to burn hot and consume itself, so, too, does a government begin damaging itself when it has grown too powerful.

I was once an anarchist, and many of my interests still lie in the unwinding of government. As an opponent, I've studied various governments throughout history. The basis of LAW is the one unifying system I've found underlying each of them. I've found other elements they've all shared, such as corruption and shadow societies... and I've studied history too long to be so foolish to think that any of our present governments are somehow an exception to those before them. Knowledge, however, truly is power.