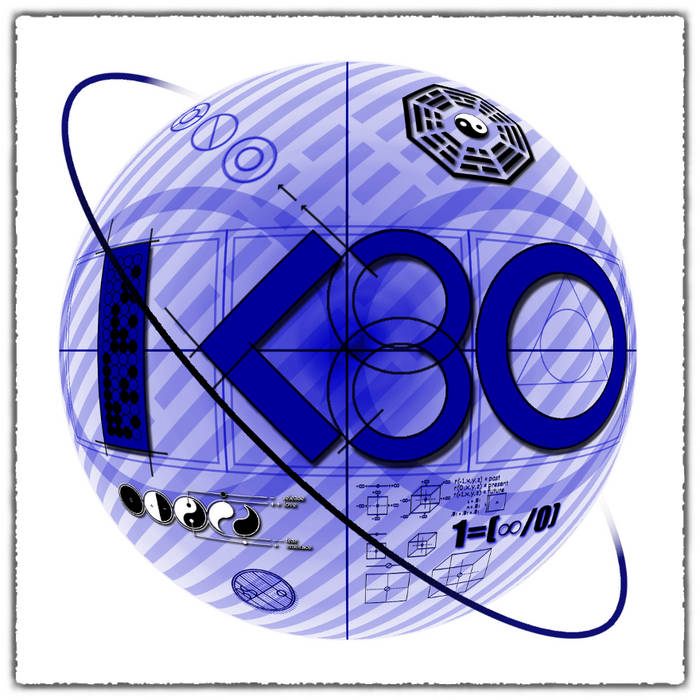 I actually finished the "Yang Mod" for this track before I finished the album version. The "Yang Mod" won't be out until January of 2k11. This is easily the title-track's sister-song... in art, music and story. It wasn't planned that they'd be released on the same day, but Burning Man required I push this one forward.

A binary sequence is naturally infinite up until the point where you need to make sense of it; to measure it, break it down and decode it. To observe it. It is the third leg of the trinity--the spaceholder. 1. 0. ?. And it is the ? that is infinite. Ad infinitum.

I have to abridge my notes on the art, as there is simply too much to cover in these three primordial symbols. The actual title of the track is "| <3 0", but file-systems and Internet syntax don't allow for the pipe (|) and less-than symbol. "| <3 0" is a l33t amalgam of "LOVE". The lines of the sphere form the progression of the elements out of emptiness--chaos out of order--as found in the "I Ching", then wrap back around themselves into the symbol of infinity. The progression of the elements can be seen as the Big Bang, as they describe the laws of the material universe. There is also a binary representation of this progression mapped over the 1 (The Many within The One; the cells within the body).

The Ba gua (wheel of the eight elements) wraps up over the right side Death Star style. To any student of Taijiquan or Kung-Fu, the symbolism is immediate. I won't be elaborating on it for anyone else. The circle within a triangle within a circle (aka, "The Reality Principle") rests within 0--nothingness. The equations below mark the birth of each dimension out of the one before it, from the subtraction and addition of one-dimension to the multiplication and division of two-dimensions, then on to powers and roots in three-dimensions. The layers of hovering shapes and lines are a nod to "Flatland", where I first learned the dimensional progression. The Infinity Paradox equation stands out in bold. Some make the mistake of placing "Time" in the 4th-dimension, but all dimensions require Time in order for there to be any motion. Therefore Time precedes spacial-dimensions as the zero-dimension.

Wrapping down around the left, but above my signature, is a breakdown of the Taijitu into its mathematical part: lesser-yin, greater-yang, lesser-yang, greater-yin. If the wheel stopped turning even a moment, the elements would make contact and negate each other. This is the end of all things. The solving of the equation. While there is more, it is always best to let others discover for themselves. It is the only method that sticks.

In summary, this is a very systematic and mathematical composition from art to music (AKA, "formulaic"). Enjoy!

ryöko no koson suigetsu o saguru
Two monkeys reaching for the moon in the water.

shaka
To overlook; miss an opportunity; to slip from the right way.